The Origins of Christmas Wreaths 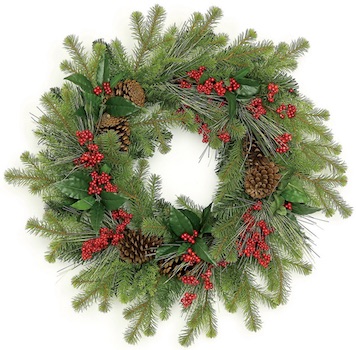 Wreaths are ornamental arrangements that can be found in homes throughout the year; however, for many, they are a seasonal decoration, and the holiday most widely associated with wreaths is Christmas. While they can be made of almost anything, Christmas wreaths are most often made of fresh greenery and seasonal flowers. During this season, they are generally either placed flat on a surface for use as an Advent wreath or hung on one's wall or front door. Although they've become a holiday tradition in the United States and in other parts of the world, many are unaware of the long history and assorted meanings associated with them.

The word "wreath" comes from the Old English "writhan," meaning "to twist," and over the centuries, wreaths have been associated with a variety of cultures. It's believed that wreaths date back to the Persian Empire, ancient Egypt, and ancient Greece, but their purpose during those times differs from the way that they are popularly used today. In the Persian Empire, wreaths called diadems were a sign of power or authority worn as a headdress. They were made of fabric, adorned with jewels, and often worn by royalty. Ancient Egyptians also wore a type of wreath as a headdress, but theirs was made of flowers and called a chaplet. In Greece, particularly Rome, wreaths made of laurel were worn by emperors and awarded to warriors and others as a symbol of honor. Additionally, Romans awarded olive leaf and laurel wreaths to winning athletes and even poets. Wreaths were also hung on doors and are believed to have been signs of victory.

Christmas wreaths are also connected with the pagan holiday of Yule, marking the winter solstice, which was celebrated by ancient Germanic and Scandinavian peoples. This 12-day festival, which was also called midwinter, was held to honor the returning of the sun and the seasonal cycle. The wreaths used during Yule were meant to symbolize nature and the promise of spring. They held candles that were lit in hopes of the return of the warmth and the sunlight. Rome, too, had an annual midwinter celebration, called Saturnalia, during which they worshiped Saturn, who was the god of agriculture or sowing, from Dec. 17 through Dec. 23. For Saturnalia, Romans used holly wreaths as a form of decoration and also gave them as gifts.

Today, some religions use wreaths for purposes not associated with Christmas. Ramadan, for example, is a holy month observed by Muslims, and at the conclusion of Ramadan, the end of fasting is marked by a three-day celebration called Eid al-Fitr. Door wreaths are often displayed during this time.

But perhaps the most widespread and well-known use of wreaths comes in connection with Christmas and with Christianity, as their circular shape is said to symbolize eternal life and the unending love of God. In the 16th century, the use of wreaths during Yule was adopted by Christians and became a custom in the form of Advent wreaths. These wreaths were traditionally made of evergreens, which also symbolize eternal life, holly oak, and red berries. The red berries and the thorny leaves of the holly oak represented the crown of thorns worn by Jesus and the drops of blood that they drew. The Advent wreath is meant to hold four candles, three purple and one pink. The first candle to be lit during Advent is meant to symbolize hope and is a purple one called the prophecy candle. On the second Sunday of Advent, another purple candle, called the Bethlehem candle, is lit. It symbolizes love to some and the manger of Jesus to others. The pink candle, called the shepherd candle, represents joy and is lit on the third Sunday of Advent. Peace is represented by the angel candle, which is the final purple candle and is lit on the fourth Sunday of Advent. Sometimes, a fifth, white candle is added to the center of the wreath. This is referred as the Christ candle, and it's lit on Christmas Eve. These candles symbolize the coming of the light of Christ.

For some people, Christmas wreaths are not meant to be religious symbols but rather are strictly for decoration. Today, a wreath that's hanging on one's door at Christmas may symbolize the invitation of Jesus into one's home, or it may be inviting the spirit of Christmas into the home along with good luck.

For more information about the origins of Christmas wreaths, click and read any of the links below.